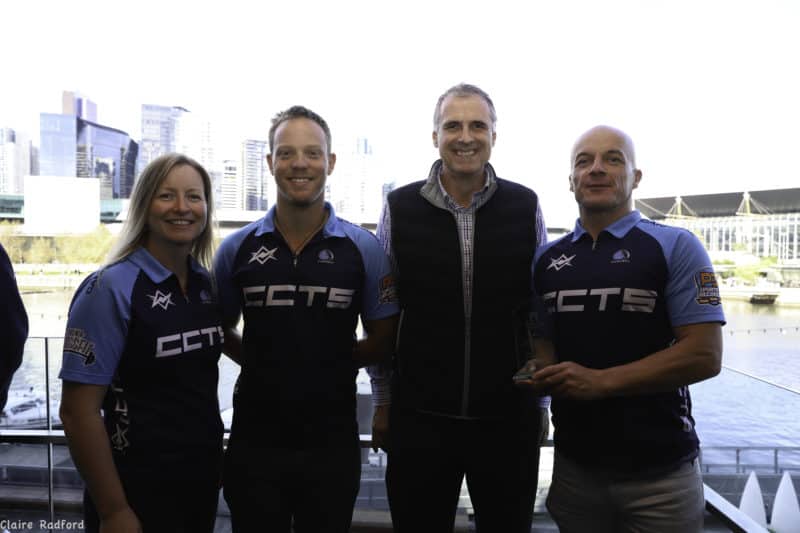 Held at the new venue of River’s Edge, the 2019 Triathlon Victoria Awards Breakfast saw over 160 members from clubs across Victoria to celebrate the 2018/19 triathlon season and the success of their peers.

Victorian triathlon legend, Peter Robertson, was the highlight of the morning, sitting down for a Q&A with Triathlon Victoria Executive Director, Grant Cosgriff, to reflect and discuss his incredible journey from an emerging junior runner at Mazenod College to a World Champion triathlete.

Among the highlights of the morning, Casey Cardinia Triathlon Squad were acknowledged for their contributions to the Casey community and commitment to the development and growth of triathlon in the area, with the President’s Special Recognition Award. While Nunawading Triathlon Club were awarded the inaugural Club Initiative of the Year Award for their ‘Get Into Triathlon’ program, which has helped bring a significant number of new participants to ‘the starting line’.

Jill Stevenson’s long-running dedication to the Western Suburbs Triathlon Club saw her achievements recognised with the Volunteer of the Year Award. Throughout her time at Western Suburbs, Jill has taken on the roles of event manager, race director, uniform manager, Treasurer, President with her dedication and commitment as a volunteer to the growth of Western Suburbs and the sport of triathlon making her a worthy recipient.

Inclusive Sports Training’s Ariadne Ajani was celebrated for her outstanding achievements in the face of adversity with the Most Inspiring Performance Award. In overcoming a learning disability, a physical disability and epilepsy to master the swim, bike and run of triathlon, Ariadne shows great courage and determination that inspires her clubmates and community.

Knox Triathlon Club’s Tony Ruddick was awarded Technical Official of the Year, thanks to a prolific season of officiating which saw Tony officiate 21 races over two years across all levels of the sport. While Jenny Dennison was rewarded for her outstanding contribution as a technical official with less than three years’ experience with the Technical Recognition Award.

Amongst the major award winners, 24 State Series winners were announced and presented their Age Group titles in recognition of their successful seasons.

Triathlon Victoria would like to congratulate all the winners and finalists on their nomination. Head over to the Triathlon Victoria Facebook page for the full photo gallery from the morning, thanks to Claire Radford Photography.