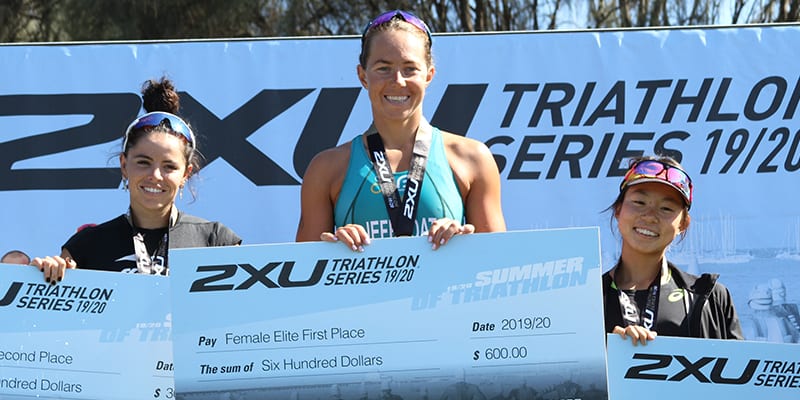 Overnight rain wasn’t enough to put racegoers off their game as a cold front greeted triathletes for Race 4 of the 2XU Triathlon Series, which returned for its second season appearance at Elwood today.

A modified course was required after heavy rain fell across Melbourne on Saturday which saw water quality affected and the EPA deeming Elwood Beach ‘ poor’ and not suitable for swimming.

While disappointed not to swim, Jeffcoat, who has experienced a few duathlons in recent times, wasn’t fazed by the last-minute course change.

“I come from a swim background, so I was a little disapointed because I always love to get in the water. We did a few duathlons last year in the series due to water quality, so there were no real surprises. I think it’s always good practice to get out there,” Jeffcoat said post-race.

The top-25 athletes in each age group were awarded points towards qualification for the Australian Age Group Team World Championships in August, while those selected for the SSV Triathlon Team will represent their state at the SSA 13-19 Years Triathlon Championship in March at Harvey Bay.

The 2XU Triathlon Series will now head to Green Point, Brighton for Race 5 on Sunday, March 15 2020, which will include the running of the 2020 Victorian Schools Triathlon Championships.

The championships offer juniors a unique challenge and introduce them to a lifestyle sport that builds resilience, improves confidence and keeps the focus on finish lines, not finish times. Junior athletes can participate as an individual or as a team and include a multi-class category. Further information or to register, please visit the event website.