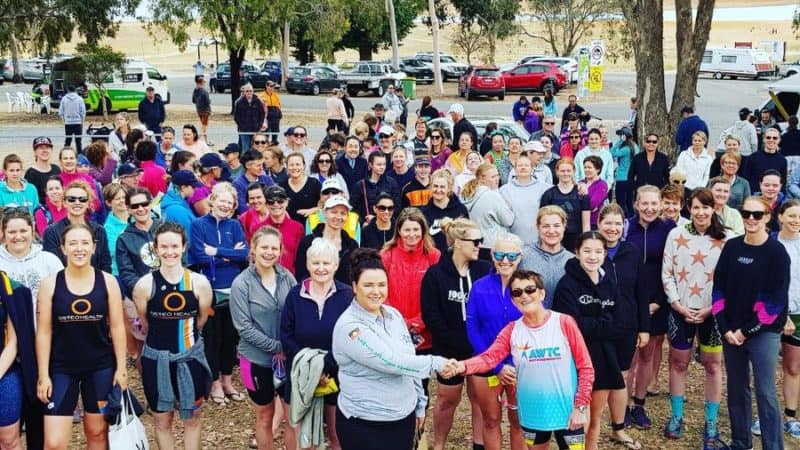 The Albury Wodonga Triathlon Club (AWTC) is one such club, kicking off their race season with their successful Women’s Only Tri.

The decade-old event continues to build the profile of triathlon in the local community and provides a solid platform to promote triathlon as an inclusive sport option for women.

The popular event continues to go from strength to strength, recording strong growth year on year. After initially starting with 28 participants in year one, the event now averages 130 entries.

“Many women are once a year warriors, but we’re hoping to break that cycle,” said Nadia Mellor, President of AWTC.

“The Women’s Only Race aims to provide females within the local community with the confidence to build on their training and set new goals for themselves, competing in mainstream events,” Mellor added.

To encourage women to work toward testing themselves and work towards a Sprint Distance or Endurance Course, the AWTC holds the Women’s Only Tri on the same course and distance as the Mini Tri races.

AWTC attempts to foster a safe, comfortable and non-competitive environment on race days and in the lead-up. Male club members have been hugely supportive of the event, with many assisting with marshalling, training and event operations.

These actions help represent the friendly and open mindset shown by AWTC around this initiative that supports, developed and empowers women in triathlon. It’s fantastic to see the success of an event that is boosting the growth of triathlon in regional areas and female participation in the sport.

Triathlon Victoria is proud to be involved in the Victorian Government and Office for Women and Girls in Sport and Recreation’s Change Our Game initiative, designed to promote female participation in all areas and levels of the sport.

We encourage every triathlon club and squad to be inclusive and work to develop programs that help to support, develop and empower women in triathlon by supporting our Women in Triathlon initiative as part of Change Our Game.