Zwift has announced the six members of its global Academy Tri Team for 2021, which proudly sees Victoria (and Australia) represented.

Melbourne Triathlon Club’s Vanessa Murray is one of a select few chosen as part of this year’s team who will now focus on preparing for the long-course athlete’s holy grail – the IRONMAN World Championships in Kona.

The New Zealand native and regular rider in Triathlon Victoria’s Club Race Series (powered by Zwift) was among more than 134,000 individuals who put themselves forward. Murray’s reaction to her selection was one of pure emotion and excitement after coming so close the previous year.

“I’m so excited! I was on the shortlist last year, then COVID hit, and the ZA Academy 2020 was put on hold and eventually cancelled,” said Murray.

“I thought I would try my luck again. Eventually what I thought was the final interview, was Zwift HQ and Sarah True sharing the news that I was on the team. I was very overwhelmed and it took a while for it to sink in.”

The completion of 10 workouts, two bike races and two runs were required, with selection based on Zwift Academy performance, past race results and personality. Selected workouts were designed by Endure IQ’s founder Dr Dan Plews and were carefully crafted into her training program by Victorian coach Sean Foster to optimise her chances of success.

“I wouldn’t be in this position without the support of the Melbourne Triathlon Club, Sean Foster and Fluid Movements. Since the day I first asked him to work the ZA Academy sessions into my IRONMAN program, Sean has backed me every step of the way.”

“All of my Fluid and Melbourne Triathlon Club teammates have been incredibly supportive and genuinely excited for me, which I think shows the amazing camaraderie that exists in the sport of triathlon and one of the many reasons why I love this sport.” 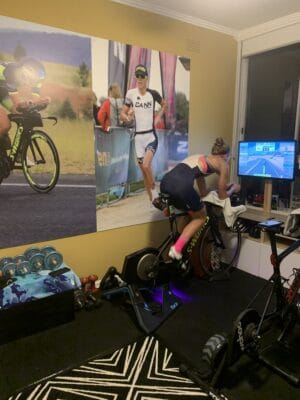 A bevvy of support will be offered to the team from some of the best-known triathlon brands, including the supply of bikes, race kits, shoes, and helmets in a money can’t buy experience. Zwift Academy Tri team mentors, including American professional triathlete Sarah True, will also be on hand to support and guide the selected few.

“I have some big goals for Kona, and the support of Zwift Academy and the sponsors is one of those once in a lifetime opportunities that come along,” Murray added.

Murray is no stranger to long-course racing. Breaking into racing in 2009, she made her IRONMAN debut at Kona four years later. A regular age-grouper, she finished every race on the podium in 2019, including a win at IRONMAN Cairns 70.3.

With a professional career in business and marketing, Murray has worked for 2XU, Les Mills (NZ), Repco and now the Department of Transport. In 2020, Murray was part of Triathlon Victoria’s Women in Triathlon webinar series, where she spoke to women from all walks of sport about balancing competitive triathlon with a career.

“I love to race on Zwift. It was so great during lockdown to connect with my triathlon friends here and in NZ, and the races are so intense they are such a good way of getting a solid workout in.”

Triathlon Victoria’s virtual Club Race Series returns with a fresh new look and a five-week season starting July 3, 2021. Be sure to keep your eye on Triathlon Victoria’s digital channels to join and start your own journey to Zwift Academy selection.