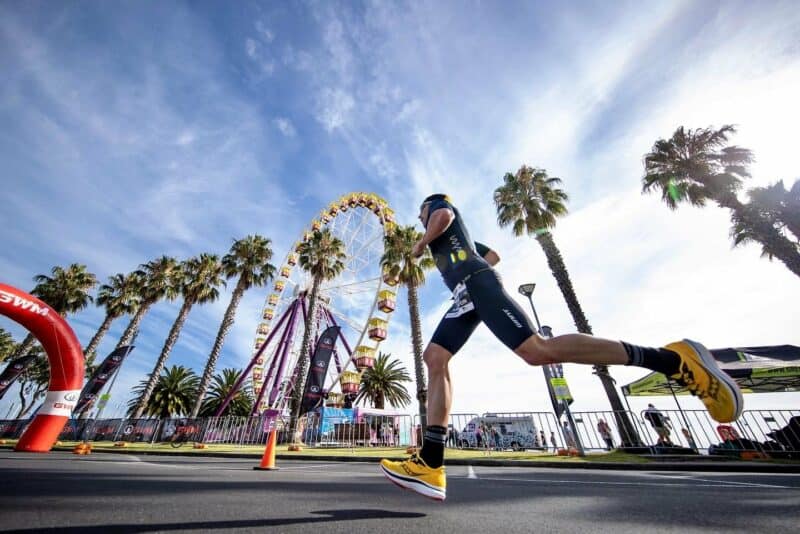 Sam Appleton and Lotte Wilms have claimed victory at IRONMAN 70.3 Geelong, with both athletes leading from start to finish to kick off 2022 with a win.

Appleton crossed the line in 3:41:15, almost two minutes ahead of defending champion Steve McKenna, with Josh Amberger a further 30 seconds behind in third.

In the women’s race Lotte Wilms was unstoppable at the front, finishing in 4:07:41, more than three and a half minutes clear of Amelia Watkinson, with Victorian Grace Thek a further five minutes behind in third.

Appleton’s win was his third IRONMAN 70.3 Geelong title, after going back-to-back in 2017 and 2018, with the 31-year-old only arriving home to Australia from 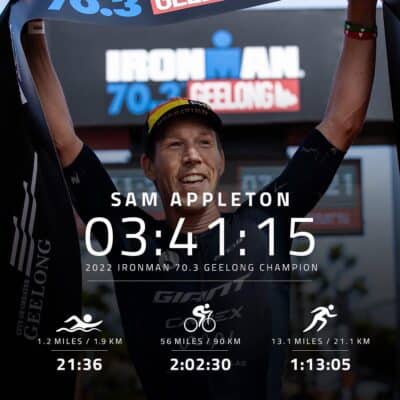 America a few days ago, his first time back in the country in two years.

“It feels great to kick off 2022 with a win here in Geelong,” said Appleton. “I love this race, it’s actually one of my favourite races on the whole circuit, it’s beautiful and the whole town gets behind it, it’s a great atmosphere.”

Appleton came out of the water following the 1.9km swim in Corio Bay just behind Amberger, with the top two extending their lead over the 90km ride. Appleton started the run just 15 seconds clear of Amberger and powered ahead to claim victory, with McKenna passing Amberger in the final stages of the run to finish second.

“I kind of knew what I needed to do to win and having Josh here is also really good, we play into each other’s strengths,” said Appleton. “We just know what to do straight away, we don’t even need to have a chat, we’ve been racing against each other for 10 years or more. We completement each other really well and we set about making it a two-horse race as best as we could and I feel like we did that for the most part, Steve McKenna ran really well into second to get Josh right at the end.

“The race plan was to swim hard, bike hard, I knew there were a lot of really fast runners so it was in my interest to get a bit of a gap and fortunately I had good run legs, last year my run let me down a little bit and today I felt better than any of my runs in all my races last year,” he said. “I made a promise to myself at the end of last year to work on my weaknesses and that was obviously my run and today was a step in the right direction.”

Appleton’s win was his first IRONMAN 70.3 victory since IRONMAN 70.3 Waco in October 2019, with it being the perfect way to kick off his 2022 campaign.

“First win in three years, it feels great to get back on and notch another win, I think that’s 15 or 16 for the career now and it feels good, there’s some big races coming up in the middle of the year that I’m targeting and this was the launching pad into the rest of my season at large,” he said. “I love Australia, Boulder’s great and I love it for training and everything but Australia is my home, it’s important for me to race here, I want to maintain a presence here, I’ve got fans and family here, my brother lives in Melbourne and he came here to watch, my Dad flew down from Sydney to watch, it’s really special and I love racing in Australia.” 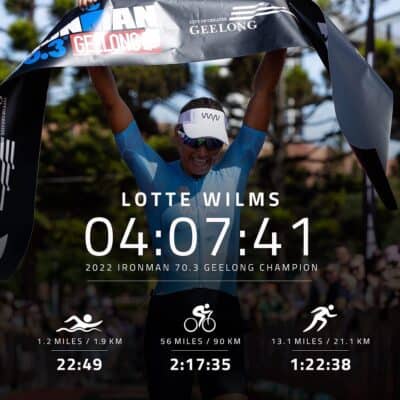 In the women’s race Lotte Wilms was unstoppable at the front, finishing in 4:07:41, more than three and a half minutes clear of Amelia Watkinson, with Victorian Grace Thek a further five minutes behind in third.

Australian-based Dutch athlete Lotte Wilms was the athlete to beat all day, coming out of the water with an almost one and a half minute lead and from there on she never looked back, continuing to extend her lead over the 90km ride and 21.1km run.

“Swim start was really good, not really choppy so I could have a good swim, the water felt really good, it wasn’t cold like I thought it would be,” she said. “On the bike I just stayed on my pace that I thought I could hold for the first lap, I got pushed by the other girls, I saw them half way through so I thought I’d just see how far I can push this bike and it went pretty good. My heart rate stayed low so I was really happy to come off the bike and then I just ran my own pace, I’m back in good running, I had some run injuries last year so I’m really happy I could  run for the last six weeks and I don’t know, I came first, it was really unexpected, I was just focused on what I was doing and not where I would place and this is a good start to the year.”

Wilms’ win in Geelong was all the more impressive with it being just her second ever IRONMAN 70.3 race, after claiming victory on debut at IRONMAN 70.3 Sunshine Coast last September.

“It’s crazy, really crazy, but absolutely nice and I really like the IRONMAN races, the feeling is really good, there were a lot of people around today and the Geelong spectators were fantastic, I got so much support, I really enjoyed the race today, especially on the run,” said Wilms. “I’ve been here for eight years, I moved to Australia eight years ago, I really love this country, I trained with a swim team up in Newcastle when I was 19 for around eight months and I really loved the sport culture and I said I want to go back and taste more of that. In Holland I had an office job for eight or nine years before I got down here and when I got here I just wanted to enjoy the outside as much as I can. It’s such a beautiful county, I travelled the whole country first and then I was like I’m going to go back into sport and since then I just really love it and I’ve realised I’ve got this luxury position to be able to do this and as long as I can do this I will because I think it’s a really special life.”